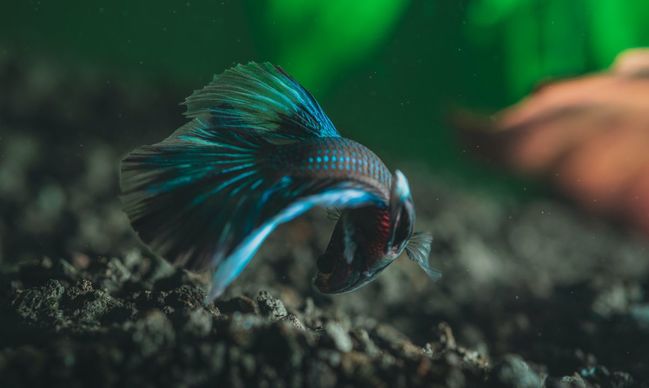 Bettas are some of the most popular pet fish in the world and it makes sense to wonder if they can eat human food. While hopefully nobody is planning to feed their Betta some steak, other foods can be accepted and enjoyed by your Betta.

And this is what we’re going to talk about today: if a Betta can eat human food and what human foods are best for your pet fish.

While it is not indicated to keep a Betta on a strictly human diet, Bettas can eat human food like lettuce, spinach, bits of cucumbers, but also apple bits and boiled peas plus a lot more.

What human food can Bettas eat?

We’ve already talked about how long can a Betta fish survive without food. But if you run out of flakes, instead of letting your fish starve, it’s definitely better to feed them some of the safe to eat human foods that you might have around.

And while your Betta might be ready to try out all sorts of foods – it’s not indicated to experiment and feed them things their bodies are not used to ingest.

In other words, while a Betta could eat a tiny speck of steak or pork or any other meat… it’s not really recommended or healthy for them.

Let’s take a quick look at what kinds of human food can a Betta eat (and how to prepare it for them).

Lettuce or any green leafy vegetable can be a good human food for Bettas. Cut them into tiny bits and feed them to your Betta raw.

Ideally, though, you should put them for a few seconds in boiling water to make them easier to digest.

Only offer lettuce or other leaves one bit at a time: feeding too much can negatively impact the quality of the water in your tank.

While it fits the “green leaf vegetables” category, I wanted to write about spinach in particular because it is actually pretty nutritious for a Betta, having lots of vitamins and minerals.

Give it to your pet just as you would with the lettuce – in tiny bits, small amounts and ideally boiled for a few seconds in water.

While this is a type of food that snails and shrimp seem to prefer, Bettas can eat a bit of cucumber as well.

Make sure to cut a small stripe of the meaty part (no seeds!) and feed them to your betta one by one.

While not particularly good for Bettas, despite their health benefits for humans, apples are some of the few fruits that a Betta can consume.

Cut them into tiny pieces and feed them to your fish one at a time. Make sure that they eat all that you give them – any leftover apple in the tank will negatively influence the quality of the water!

Boiling peas and removing the skin, then feeding small bits of the mushy part is a delight for most Bettas.

However, if you plan to offer them to your Betta as a treat, don’t use grab some from your portion if you added anything than water. The extra salt, fat and other ingredients are not good for your pet fish!

If you cook (boil) in water any of these foods, tiny amounts can supplement a Betta’s diet. I am not really a fan of feeding real meat to a Betta and I wouldn’t recommend it – especially if they live with other fish or shrimp in the tank.

But if you really want to, you can feed them small amounts of fish and seafood like shrimp, oysters or the likes. Just make sure to only used freshly prepared ones and not canned fish/seafood as that is not recommended for them.

Another food that you can offer your fish every not and then. Boil it in water until soft, then cut tiny bits of the meaty part (without any seeds).

The tiny strips will not be eaten by all Bettas – but they are appreciated by other fish, as well as snails and shrimp so it could be a good overall snack. But don’t overdo it and remove any excess food after a couple of hours.

Ideally, serve no more than what they eat.

This might not be your kid’s favorite dish (or yours) but Bettas generally like it. Tiny bits only of freshly boiled broccoli can be eaten by a Betta.

I have very mixed feelings about bred being given to Bettas or fish in general.

While Bettas can and will eat bread crumbs, it’s not something that you should feed them in my opinion. Many do without problems.

But bread in most cases is extremely processed and has lots of added chemicals, preservatives and things that Bettas shouldn’t eat (including sugar, salt and a lot more).

This is why I don’t really recommend feeding any bread to your Betta. Yes, they will eat it but it can have some negative effects on their health and lifespan.

Should a Betta be fed human food?

We’ve seen that Bettas can eat human food and will eat most of the things you give them if it’s small enough for them to swallow… but should you feed human food to a Betta?

Generally, there is no problem with this, if you only give such treats occasionally and not instead of regular fish food.

Some foods (like lettuce, carrots, peas and spinach) are better than others (bread, fruit) and some fish won’t touch specific human foods – probably it’s just a matter of taste.

But for some fun and if you really want to offer your pet fish a treat and you don’t know exactly what to do, some tiny strips of human food can do. Although we do recommend choosing a great name for your Betta instead.

Also, have in mind that there are some human foods that you should never give your Betta. These include most fruits (especially all citrus fruits as they can’t handle the acidity), but also starchy vegetables (like potatoes) or bananas, beans or carrots.

I would also go as far as saying that you shouldn’t feed your Betta any bread crumbs (although this is probably the first human food you gave your fish), nor any sort of meats. While your Betta will probably eat these, it won’t give them any benefits.

And this would be it! Hopefully, you have a clearer picture now regarding feeding human food to a Betta and you know what treats to offer your pet fish from now on.

If you still have any questions about this or you have any particular foods that are not covered and you want to know if they are safe for your Betta – ask ahead in the comments section below.