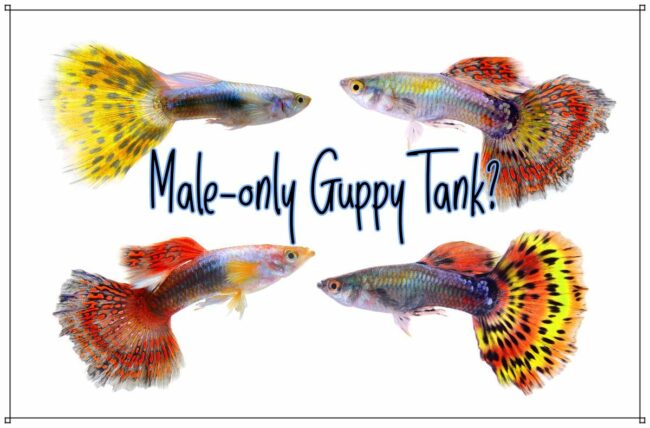 I love guppies because they are easy to care for and have amazing colors… but I don’t like the fact that they multiply like crazy. A solution to this problem would be keeping an all-male guppy tank. But is this even an option?

To start with the answer – Yes, you can keep only male guppies in a tank and the fish will be relatively calm with each other.

I have a tank with just three male guppies – and they’re doing great. Of course, you can have an all-male guppy tank with more males without a problem.

Actually, it is recommended to have as many male guppies in the tank as possible in order to reduce the effects of aggression.

They do like to establish dominance and to prove that they are the alpha male in the aquarium. This means that some fighting could take place, including fin nipping and chasing in the aquarium.

This is usually happening in the early days of the males living together. I have my three males living alone for over an year now and they don’t fight. They never fought (or at least I haven’t seen them fight)… but there is some interesting behavior I noticed.

Or at least it seems so. In the case of the three guppies that I own, I notice a lot of mating-like behavior between the guppies.

They are circling each other and dancing and showing off their best features. I am not sure if that is them trying to prove they’re the alpha male in the most non-violent way possible or there’s indeed some sweet love making involved.

But as long as they’re not fighting and they are having fun, it’s all good with me. Just thought it was a really interesting behavior and the result of them having no females around.

How to Keep an All Male Guppy Tank?

So, now that we know that we can indeed keep an aquarium with only guppy males, let’s see what we should have in mind when going for one.

First of all, we’re going to talk about numbers and the size of the tank.

Guppies are heavy breeders and will multiply like crazy, but if you have a really large tank and just a small population of starting guppies (males and females), it will take some time before they get out of control.

So always consider the size of your tank and keeping it all natural.

Sure, you can keep just males in a tank in order to make your life easier (and theirs, eventually since overpopulation in a fish tank can cause tons of problems), but they might be really stressed out if it’s just males around them.

We can’t know for sure – and my three male guppies do seem to do really well all by themselves – but it’s still a possibility. So try to decide if maybe you will be able to add some females to the tank as well…

If not, here are the things you should look at when setting up your all-male guppy tank:

1. Choose a larger number of males

Yes, it’s working in my case with just three males, but it’s a lot easier if you have five or more. This way, aggression between them will be reduced to minimum and the weakest of them will get some time to breathe.

In my case, the three males had already been living in a large community tank before they moved together so they weren’t completely unfamiliar to each other. Maybe this helped in keeping the aggression levels low.

But for all new males that didn’t live together… some sparks might appear. This is why it’s best to try and get at least 5 for your fish tank.

2. A large aquarium is required

The general rule of thumb is to have one gallon of water for each fish in your tank. This would mean that you need a 5 gallon for 5 male guppies.

While this is indeed a good starting point, try to go with an aquarium as large as possible. If you offer them 2 gallons or more per guppy, it won’t be worse – on the contrary.

I keep my three guppies in a 31 gallon tank – which is also heavily planted, has a dozen microrasboras around and tons of shrimp and snails. So a lot of room for the fish to swim, hide, run…

If you’re going to cram your guppy males in a tight place, you’ll seem them cause more trouble than otherwise.

Even if you have just a few males, some will be weaker than the other. And these fish might need a place to hide.

Plants in an aquarium – as well as hardscaping elements like tree branches or any sorts of decorations will help.

Plants are the natural way to go – not only they will offer them some extra activity (nibbling algae off the leaves), keep the water clean and make your aquarium look nice, but they will also offer them a place to hide and catch their breath when needed.

Make sure to pick the best plant substrate to make sure that your plants grow nicely and without problems.

Otherwise, the stronger guppy might attack the weaker one and cause them harm.

Should you keep a male-only guppy tank?

We saw that it is possible to do so. As long as you follow the basic rules above, there is no point in saying that you shouldn’t do it.

Guppies are amazingly beautiful fish (some of the most beginner-friendly ones out there) but they tend to breed like crazy. No matter what you do, if you have male and female guppies in a tank, sooner or later, you will have problems with over-population.

And instead of flushing baby guppies down the drain, I recommend keeping an all-male fish tank.

There are voices claiming that it’s not natural and that they don’t feel well… but you can never know for sure.

Watching my guppy males in the tank gives me no reasons to suspect that they’re not feeling well, that they are unhappy or anything. They’re as active and colorful and nice as ever.

So I don’t really think that there’s a problem with keeping an all-male guppy tank. You should do too if you love guppies but you don’t want to deal with the overpopulation issues that will surely arise at one point.