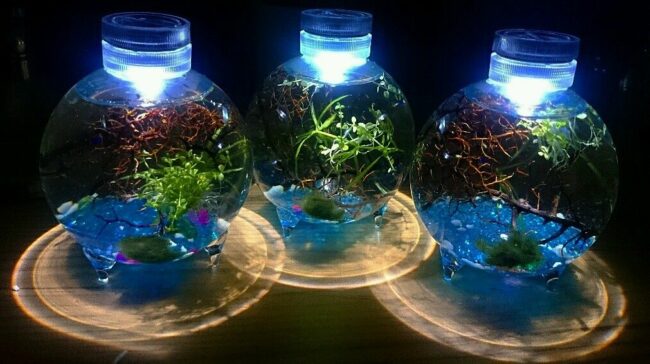 Before even starting your own jarrarium, you should decide how you want it to be: a sealed jarrarium that should basically be a self-sustaining water ecosystem; or an unsealed one that allows you to do maintenance whenever needed and fix any wrongs along the way.

While it might sound like an unsealed jarrarium is easier than a sealed one, the reality is a bit more nuanced.

There’s almost no difference between the two if you only have plants inside, but things become a bit more challenging if you want to add live animals in your jar.

We have already talked about animals in jarrariums and the conclusion is that they make the entire process a lot more difficult, especially for a sealed jar where you can’t help with anything – from extra food to water changes.

Even smaller and hardier animals – like shrimp and/or snails – will generally require at least some sort of maintenance.

In the long run, they can destroy the already precarious water balance inside your jarrarium, making sealed jars a real challenge for animal life.

So basically, when deciding if you want to do a sealed jarrarium or an unsealed one, you have to have the following important things in mind:

1. If you only use plants in your jar, both sealed and unsealed ones will perform pretty much the same. Plants will grow and take over in the sealed jarrarium, but it might be interesting to see.

I recommend using low maintenance, low growth plants for jarrariums, no matter if you choose sealed or unsealed ones.

2. If you plan to add live animals, it’s going to be a lot easier – and with higher success rates – to opt for an unsealed jarrarium.

This will allow you to do proper maintenance in the jar, from water changes and removing debris to keeping the plants trimmed and replanting if needed.

I have managed to have heavily planted, large jarrariums with shrimp and snails be self-sustaining (at least for several months), but that’s the most you can hope for in terms of animal life you can add.

If you want fish in your jar, you will need to feed them constantly – and also do regular water changes as there is simply not enough in a small jar for them to survive long term. This means that you will have to go for an unsealed jarrarium.

Even with snails and shrimp only, it might be a better idea to go with the unsealed option because it could be helpful to do water changes at least every three to six months.

So a true, self sustained, sealed, autonomous water ecosystem in a jar is very difficult – if not impossible – to achieve when we’re talking about adding live animals.

Should you really stay away from unsealed jarrariums?

Definitely not, especially if you are like me and you love the idea of building a self-sustaining ecosystem. You might fail – and fail a lot – but this doesn’t mean you should avoid it.

Creating an unsealed jarrarium is easier than you might think, as long as you only think about plants and any microorganisms that make their way in. With nothing but soil and plants (and optional decorations), you can create thriving, self-sustaining, unsealed jarrariums.

I have self-sustaining, sealed jarrariums that are up to 3 years old and still doing great after all this time. They also range in size from tiny (15ml of water!) to larger – up to 2 liter jars, but they all have nothing but plants inside.

I did manage to create a self-sustaining jarrarium which was heavily planted and lasted for close to two years, with snails and shrimp before they all died – suddenly. I am sure it was my mistake and what actually destroyed them was my intervention.

Since the plants had grown tremendously in the past two years and you could barely see inside and there was also some algae growth on the glass, I decided to unseal my jar and do some maintenance.

I trimmed the plants and cleaned the glass, also making a partial water change of around 35%.

Just a week later, my thriving population of shrimp was gone and eventually all the snails died too. I believe that the fact that I interfered and altered the precarious balance that was established there resulted in me ruining that jarrarium.

So in some cases – especially when you manage to reach what appears to be a self-sustaining water ecosystem, it might be best not to interfere at all.

But getting there is not easy. Most of my jarrariums – even those that were heavily planted, have failed once I added livestock.

Go for a large jar from my list of recommendations, add actual soil and lots of plants, then go for a single type of animals, without overdoing it. I prefer shrimps only instead of snails because the latter tend to multiply A LOT and they also produce a ton of waste.

For a 5l jar (1.3 gallon), I would only place 3 shrimp inside. If one of them is a female, they’ll multiply. If not, they should still survive for a couple of years.

But if you mix and match shrimp and snails, the latter will multiply quickly and ruin the balance, destroying the ecosystem eventually.

Sealed vs unsealed jarrariums: the winner

Both approaches can result in excellent jars. If you are a beginner and starting your first jarrarium, it’s better to go for an unsealed one simply because you can undo any mistakes you might make along the way.

The ability to change the water (and regularly check its parameters), as well as trim the plants, remove dead ones and add new ones offers you a lot of experience and makes everything a lot easier.

Sealed ecosystems are the more advanced part of the jarrarium world and even though they are, at least in my opinion, the more attractive ones, it’s a lot more difficult to succeed making one – especially if you want animals inside.

So, in conclusion, start with an unsealed jar and when you are confident enough, try your hand with a sealed one. Because once you start, you will surely not stop at just one jar!