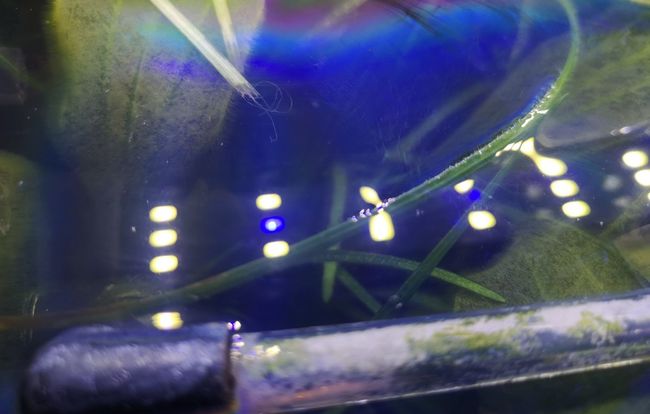 After setting up your fish tank or fish bowl, you might end up noticing that there is an oily film or a white film on top of the water in the aquarium. This is more common in Betta bowls than other types of aquariums, for one important reason.

Today, we’re going to learn everything about this strange looking white film on top of your tank’s water, what causes it and how to easily get rid of it.

This white or oily film that forms on top of your tank’s water is usually a bacterial bloom. This forms in aquariums that don’t have a filter – such as betta bowls – as still water allows for the water bacteria to multiply until they become visible.

Fortunately, this isn’t as scary as it might sound and thins film could actually become food for some of the livestock in your aquarium, especially snails who will love to feast on it.

However, it’s definitely not pleasant to the eye and it’s probably best to get rid of it – just as it is the case of those annoying white spots on your aquarium’s glass.

So let’s get a bit more in depth with the why’s and how’s regarding this problem and learn what needs to be done to reverse it.

While the most common cause for this oily film to form on to of your aquarium water is a bacterial bloom due to the fact that you don’t have a proper filtration system set up in your tank, there might be other causes as well.

So let’s see what can be the cause for that scummy looking film on top of the water!

The white film is not extremely visible in the example above – things will usually look much worse (don’t look at the reflection of my neon, but the white stuff around it).

Bacterial bloom is the most common cause for this problem. It looks like a white film on top of your water. It can sometimes look gray and it won’t dissolve if you move the water within it, like it’s a solid goo.

After more time, it can even form white, root-looking things that go down into the aquarium. They won’t move or anything, but look pretty bad.

These will normally form in smaller tanks – like Betta bowls (or even jarrariums) that don’t have proper water filtration, but could end up forming in larger tanks where water is not moving.

While you can find a temporary solution by replacing the water or cleaning the scum from the top of the water, the problem will generally persist until you add a proper filter to get your water moving.

But until then, simply remove the white film with paper towels, a net or even a small glass – at least until things no longer look extremely bad. Perform a partial water change and prepare to install a filter.

Your best bet here is a properly sized internal filter. This usually happens in smaller tanks or bowls, so a small internal filter like this one or a surface skimmer are needed. (affiliate links)

Simply install these and keep them running at all times and the white film on top of the water will go away.

When instead of the white film, you get a more oily looking film on top of the water in the tank, you’re probably dealing with some sort of organic and/or food decay.

This also happens in tanks that don’t use a filter, no matter if they are big or small.

The simple fact that water is not moving to keep all substances circulating through the tank (and collecting debris) will result in oily films on top of the water.

Bits of food, waste produced by your fish and other livestock you might have in the aquarium, as well as small bits of dead plants will all cling together and start to rot, giving that oily film on the surface of the water.

Even a dead fish (or more) could cause this – but hopefully that’s not the case.

You need your water in the aquarium to continuously circulate in order to fix this problem. The easiest way to do it is by adding a filter suitable for the size of your tank.

We have written articles sharing the best filter for large tanks, as well as the best overall aquarium filters.

Performing a water change will also help, but the problem might appear sooner rather than later without proper filtration.

Also, make sure to quickly remove any dead fish, as soon as the sad event takes place. Keeping it in the aquarium can end up causing much bigger problems than that biofilm on the surface.

Less common that the two causes listed above, there can be external reasons for an oily film to form on top of your aquarium’s water.

For example, we tend to stick our hands in the tank without washing them before that. Our hands can be oily – either naturally or dirty from various things we have touched.

Buying new decorations or even a new filter for the aquarium can end up causing this if they are not properly washed before being placed in the tank.

Prevention is the only solution here. Therefore, make sure that you always wash your hands before sinking them in the aquarium’s water (and after!)

Also, make sure to clean all the components or anything you plan to place inside the aquarium, from filters to decorations, but also plants and rocks. Clean them with water only.

Finally, covering your tank will do a lot of good – not only by preventing excessive water evaporation, but also preventing potentially dangerous substances from landing in the water.

Is the white film on top of the water dangerous?

Even though it’s definitely not pleasant to the eye, in most cases, that white film or even the oily one isn’t dangerous to your fish.

These are usually in small quantities and won’t do any harm, directly or indirectly.

However, if left unattended, they can get pretty bad. Both the bacterial bloom, as well as the oily film could end up getting so dense that they won’t allow a proper oxygenation of the water.

Risks for things to get this bad are minimal – especially in heavily planted tanks where the plants themselves will handle the 02 – CO2 cycle, but it exists.

However, there could be indirect risks. For example, if the film is caused by a dead fish or too much food that’s rotting or anything of sorts, the quality of the water will deteriorate at an alarming rate, becoming dangerous for all livestock in the tank.

This is why it is imperative to keep your aquarium clean at all times and make sure that water parameters, as well as proper filtration are always in check.