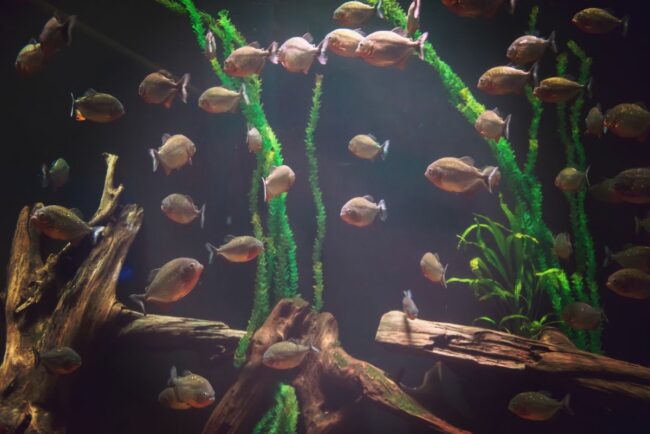 Light is a vital component of the aquatic environment. It provides illumination and sustenance to most underwater creatures, but not all fish are affected in the same way.

Some species become more active when darkness falls while others become less active or even lethargic.

Smaller fish which are usually hunted down by predators in their natural habitat, will usually hide during the day and be more active when the lights are off. Other fish have other reasons for being more active during the night..

This article will explore what sets these two groups apart and why light might affect different types of fish in different ways.

How does light affect the behavior of fish?

To begin, we need to understand a little bit about how light works in an aquarium. The majority of R-type horizontal top LED’s work by emitting a specific color spectrum that stimulates the photosynthetic processes in certain types of aquatic flora and fauna.

It also helps establish the day and night cycle, which is linked to the circadian rhythms of all fish.

Since photosynthetic organisms use light as their energy source – such as our aquarium plants – and they are constantly trying to absorb it at any given time.

When there’s no light available in an aquarium or its surrounding environment (for example when night falls), these particular fish will slow down and enter into a state of rest.

This is because these creatures rely on light as their primary source of energy and will become lethargic when it’s no longer available to them.

Like humans, they also have a day/night cycle that helps them sleep (or rest, as they don’t really “sleep” like most mammals). But also like some mammals out there, some fish are simply more active when there’s no light.

Also, fish that feed more actively both during day and night, such as those who eat zooplankton or invertebrates, tend to be less affected by changes in lighting.

Speaking of feeding… why not check out this article about what you can feed your fish besides fish food?

What types of fish are more active during the night?

Certain species of fish are more active at night, while others prefer to keep their activities restricted during the day.

One of the most common examples is that catfish tend to be nocturnal – they can often be found exploring for food when everyone else is asleep in an aquarium.

Some cichlids also become more active by night, but not so much as catfish. Another example of a nocturnal fish is the loach – though this particular species tends to be active by day more often than other similar looking types of fish.

Many of the fish species that eat algae are also sometimes more active during the night than they are when the lights are turned on.

As mentioned before, certain fishes prefer either feeding during the day or at night and they will become less active when their usual routine is interrupted.

For example, the majority of angelfish are diurnal, which means they tend to be more active during the day and rest at night.

However, there are nocturnal species out there too – such as several types of dwarf cichlid or freshwater gobies – that will become less active when exposed to either darkness or light.

How does this behavior affect the fish in an aquarium?

When it comes to what causes certain types of fish to be more active during darkness, several factors contribute to these phenomena.

For example, some fish may simply prefer feeding at night instead of the day because they find it easier and less energy-consuming.

In some cases, this may depend on the type of food they naturally consume or their internal circadian rhythms.

In other words – whether a fish is active by day or night can also be affected by its genes and how it has evolved over time to fit in with its natural habitat.

Smaller fish that are targeted by predators will be less active during the day – because their genetical information tells them they should hide in order to remain safe. It’s just the way they are!

Finally, many aquatic creatures will become less active under light and may even stop feeding.

This is because light can often throw their natural daily schedule off balance by stimulating photosynthetic processes in certain plants or algae at the bottom of an aquarium – which would normally be inactive during darkness.

Do fish need time with the light off or its best to keep it on all the time?

No, fish don’t need external light at all – plants do. Keeping the lights turned on at all times will cause them extra stress and prevent your fish from resting.

This is why you should always turn off the light over the night and ideally keep it on for a maximum of 8 hours each day – mainly for the well-being of your plants.

It’s good to know that in order to mimic the natural conditions of their environment and encourage optimal health for your fish, you should turn off aquarium lights at night.

This is because it’s believed this will recreate how they behave when sleeping during darkness (which also simulates normal day-night cycles).

However – while some types of fish do become lethargic and stop feeding during the night – others such as catfish or loaches will remain active.

In addition, some fish aren’t affected by changes in lighting conditions at all! For example, many cichlid species don’t seem to mind whether you keep your aquarium lights on throughout the night.

Do fish need to sleep?

Most fish don’t sleep in the same way that humans do, but they do need rest. When your fish are “sleeping,” you will notice that they will no longer move too much and seem stunned.

A good example of a fish that will sleep without moving at all can be your Oscars! They are typically very active during the day, but when night falls they tend to sleep with their noses pointed towards the surface of an aquarium.

This is another reason why turning the lights off during the night is a must – to allow your fish who need darkness to rest, while also allowing the “night owls” to be active and feed more.

What do most fish do during the night?

Most fish will become less active at night, but there is also a group of very special nocturnal species that become more active. However, the vast majority of aquarium fish will rest during the night.

If your fish tend to become a lot more active when you turn the lights off, you shouldn’t be worried! It’s just their normal behavior and this doesn’t really suggest that something might be wrong in the aquarium.

Some fish are simply more active when it’s darker, just as some prefer light and rest during the night.