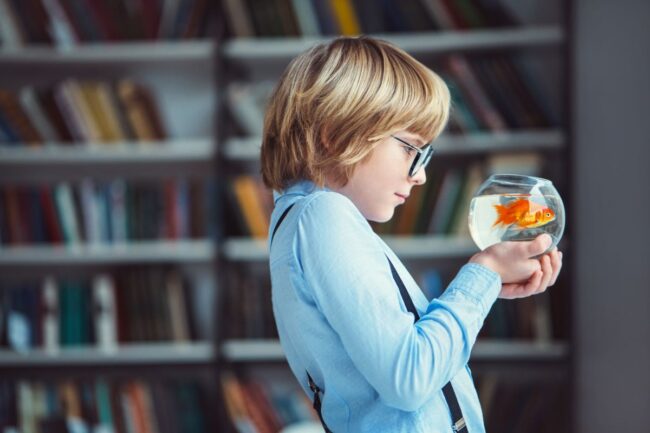 While some would argue that fish shouldn’t be kept in small aquariums, I personally disagree with that. And today, I am here to share with you the best fist for a small aquarium – you’ll see that there are plenty of options available!

The best fish for a small aquarium are betta fish, micro rasboras, gourami, dracula fish, and white cloud mountain minnows. These fish are all relatively small in size and are well-suited to life in a smaller space.

Whether you’re a beginner or an experienced aquarium enthusiast, these fish are sure to make a beautiful and low-maintenance addition to your home.

And by “Small Aquarium” I mean anything that is 10 liters (2.6 gallons) to 75 liters (20 gallons). Of course, not all fish below can be kept in a very small, 10-liter aquarium, but some will. We’re talking about all your options below.

The truth is that you do not need a very big space to keep pet fish. Some of these can thrive in smaller tanks! I am also a big fan of self-sustaining ecospheres so you should definitely consider those as an option to small traditional aquariums.

If you want to go the small aquarium route, though, it’s important to choose fish that are well-suited to living in a smaller space and to properly care for them to ensure their health and well-being.

Now let’s get to the list of the best fish for small aquariums.

Extremely popular for their looks, Betta fish can be extremely territorial, so it is usually best to house a single male in a smaller fish tank.

They won’t mind being in a larger one, but having in mind that most pet stores keep them in a glass of water, even a 10-liter (2.6 gallon) tank can be considered huge by comparison.

While they may be unfriendly to other fish, they are more interactive with humans, making them a great candidate for fishkeepers with smaller aquariums.

Betta fish are known for their vibrant colors and long, flowing fins. They can be found in a range of colors, including red, blue, and purple. They are pretty hardy and good for beginners too.

They don’t necessarily need a water filter, although one will help keeping their water clean. They are very nice to have around and if you get one, make sure to name them using inspiration from my previous article sharing some great names for your Betta fish.

Microrasbora fish are small, peaceful fish that are native to Southeast Asia. They have a sleek, streamlined body and are typically found in shades of silver, gold, and red.

Microrasbora fish are generally peaceful and make a good choice for community tanks, but I have personally kept them successfully and long term in VERY small tanks.

I had 8 of them in a jarrarium (it was not a self-sustaining one, but very low maintenance) and I consider them perfect for small tanks.

They are tiny fish (adults grow to about ¾ of an inch) and are generally shy fish that like to hide, but I noticed that if you only keep them in a tank, they tend to be a bit more courageous.

These are some of my favorite fish nowadays, so I strongly recommend getting some (there are lots of micro rasbora varieties out there) for a small tank.

Gourami are a type of labyrinth fish that are native to Southeast Asia. The gouramis make suitable fish for small aquariums not just because of their size, but also because they are pretty hardy fish to start with.

Gourami are generally peaceful, although some species may be more territorial than others. However, since it’s a small tank we’re talking about, I wouldn’t go about mixing more breeds anyway.

Gouramis come in different forms: pygmy, sparkling, and dwarf croaking. Some gourami keepers add dark elements to their aquariums to make their colors stand out.

You can raise gourami in a fish tank with lower oxygen levels because they prefer to come to the surface to add to the air they breathe underwater. This means that they don’t really need a water filter, although I strongly recommend to have one anyway.

White cloud mountain minnows are small (around 1 inch for an adult), peaceful fish that are native to China.

They have a sleek, streamlined bodies and are typically found in shades of silver, gold, and red. White cloud mountain minnows are generally peaceful and make a good choice for smaller aquariums.

Overall, white cloud mountain minnows are a beautiful and low-maintenance addition to any small aquarium. With proper care and a suitable environment, they can be a rewarding and enjoyable part of your home.

Tetras are generally known for being energetic fish, but what makes the ember kind suitable for smaller fish tanks is that they are both calm and tiny. Size is one of the most important things to have in mind when choosing fish for small aquariums, so we’ve got that covered.

Ember Tetras are less likely to stir up trouble with other inhabitants, which is interesting, given their bright red color. They can grow up to three-fourths of an inch and if you choose them for a smaller fish tank, I wouldn’t recommend mixing them with other species (apart from snails/shrimp).

A word of warning: Dracula fish should only be raised by experienced fish keepers.

Aside from being tiny fish that belong to the Danionella genus, they tend to be more delicate than most due to their lack of barbells, scales, and lateral lines, and they should only be kept in a single species tank.

If you are looking for tiny fish with personality, and here we are talking about barely reaching 0.55 inches, then this fish is a great choice. However, they are very demanding and even more difficult to find in pet stores.

Each of these fish brings color and variety to any type of aquarium, are relatively easy to care for (except for the Dracula Fish) and are suitable for beginners too – while being rewarding for more advanced aquarists too.

These fish require tanks of only 3-5 gallons to thrive (but ideally as close to 20 as possible), making them great for those who don’t want larger setups in their homes.

Aside from these fish, shrimp can also make fine additions to your small aquariums. They make for great scavengers, cleaning up waste and adding a bit of extra color to your setup.

I personally add them in all my tanks as well as my self-sustaining ecospheres. You can read more about adding livestock to jarrariums here.

However, it is important to research and properly care for any fish, regardless of size, to ensure their health and well-being.