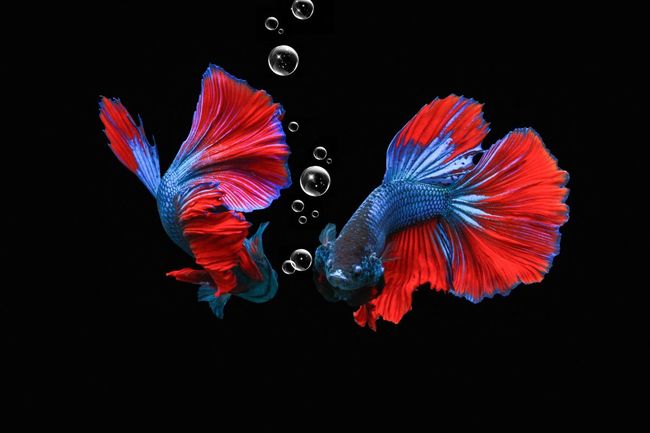 If you go to a pet shop, watch photos or videos online or visit aquarists, you will only see one Betta fish per tank, or bowl or even a glass of water. Does this mean that you can’t keep more than one Betta fish in your tank?

Bettas are extremely territorial, so you shouldn’t keep more than one Betta male in a small fish tank. They would start fighting and wouldn’t stop until just one remains. At the very least, they would end up with injuries that can become life-threatening for them.

Because they are so territorial, Bettas are usually difficult to pair up with other fish of a similar size. They could end up attacking them.

Bettas are know to attack fish that look like them – so any brightly colored fish can be considered targets or threats by Bettas.

Fortunately, the same thing doesn’t go with Betta females. We’re going to talk about all options below, as well as get a bit more in depth on this matter so you can always make the best, most educated choice when it comes to what and how many fish to choose for your tank.

Can You Keep more than one Betta Male in One Aquarium?

Like most people out there (in the end, Bettas can eat human food too), Betta males have different personalities. Some are calmer and less aggressive than others, but generally they are all pretty territorial and ready to protect their area of dominance.

This means that for most aquarium sizes, having two or more Bettas in the same setup is not recommended.

The fish will end up fighting for supremacy, nipping on their tails and fins and hitting each other until just one of them remains alive.

In some cases, with a bit of luck and with larger tanks (think 30 gallon / 120 liters at a minimum), you will be able to keep two Betta males or more, each controlling a part of the tank.

But it’s still very risky and they might end up fighting more often than not and you must meet other conditions as well.

Even in larger tanks, the males will still have to establish who the Alpha is. Once that happens, they will usually let each other be and mind their own business.

A very important thing to note if you’re trying to keep more than one Betta male in one tank! Make sure you also have more than one female added to your setup: consider a ratio of at least 2 females per male.

If it’s just one female and two Betta males, the male will fight for dominance. The same will happen if there’s just two males in the tank.

But if they’re a pack of sorts (like 2 males and 4 females or more), the Bettas will establish who the Alpha is, and that one will focus on the ladies and leave the other male alone.

Also, make sure that your tank is heavily planted and large enough to offer refuge in case of need.

Because there is always the risk of having your male Bettas get into a fight and the weaker one will have to run and hide.

As a result, your safest option is that of keeping just one Betta per tank you own. If you really want more, you can get multiple smaller containers and keep a Betta in each – but do have in mind that very low tanks or bowls are not going to give them ideal living conditions and enough space.

Even though they can live in smaller containers, try to aim for at least 5 gallons (19 liters) for each Betta that you have.

Can You Keep more than One Betta Female in the same Tank?

If having multiple male Bettas in an aquarium is not really a thing, having more female Bettas in the same tank is never a problem.

On the contrary! Even in the wild, Betta females live in sororities – which are packs of fish that travel around from area to area, meeting males and looking for those who have created nest bubbles, which are needed for breeding.

This means that female Bettas are not aggressive toward each other (although small quarrels are not uncommon), nor against other males or even other fish.

The biggest problem with most Betta females is that they are not as spectacular as the brightly colored males, with their huge fins and tail that can really impress you. And this is why most fish keepers tend to stay away from females.

But even these can be colorful and nice and look good in a fish tank.

You can keep an all-female tank for sure, or pair multiple females with a single Betta male, as long as you have a large enough tank.

Even a pair could do well in an aquarium, although in this case the male will stress the female a bit.

Having multiple Betta females is, as we saw already, a must if you want to have more than one Betta male in the same tank.

I said it again, but I repeat it: in such a case, keep a ratio of at least 2 females per each male in your fish tank.

As you can see, the common conception that you can’t have two Betta males in the same tank is only partially true.

Yes, you can’t put two single males in a small aquarium. But with a properly sized one, one that is heavily planted and has a large enough female population, you shouldn’t have any major problems holding more bettas in the same tank.

And now that numbers are not really a problem, why not check our article filled with great suggestions for Betta fish names?